How migrants are crucial to your lunch – Stephen Devlin 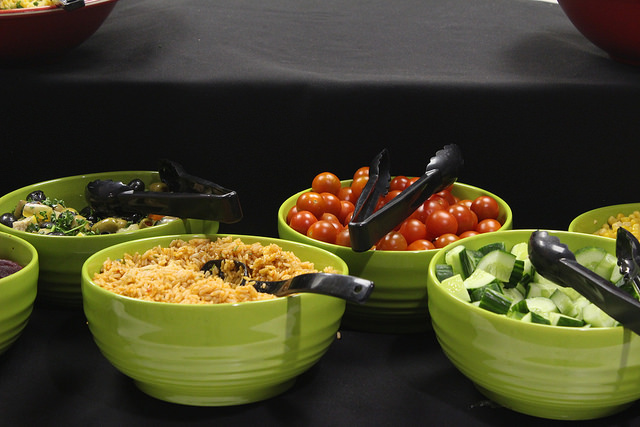 How migrants are crucial to your lunch

More than any other sector, the UK’s food industry relies on migrant workers. Fruit pickers in the strawberry fields of Scotland, warehouses full of vegetable packers in the East of England, Lincolnshire factory line workers checking M&S chocolate eclairs, the cashier at the corner shop where you buy your milk, or the baristas at a London Pret a Manger. So many of these jobs are done by migrants.

Overall in the UK, migrants from the EU make up around 6% of our workforce. In food services (e.g. cafes) the proportion is 11% and in food manufacturing it’s 27% (1). No more than a sixth of seasonal agricultural work, like fruit-picking, is undertaken by British workers (2).

Migrant workers are crucial in making sure food makes it to our plate how and when we want it. But in return they get a pretty raw deal. In many cases the jobs we are talking about are back-breaking, badly paid, precarious and even highly exploitative. So while we celebrate the contribution that migrants make to our economy we must also recognise that these choices are not made entirely freely. These are difficult jobs that people generally do out of necessity, not passion. It’s not an ideal system – we should be working towards a future in which all work can pay well, give people autonomy and feel meaningful. But the first step down that path does not involve depriving migrants of economic opportunities; the first step is organising those workers to demand better conditions for themselves.

That means continuing to extend economic opportunities to migrants after Brexit, but redoubling our commitment to drive standards up for everyone – domestic and migrant workers alike.

But the Government has made clear that these migrants don’t even feature in their vision of the UK’s future. The language and debate that has followed the referendum may be making this a reality long before our actual extrication from the EU – a recent survey of agricultural businesses found ‘a dramatic change in the availability of EU labour’ in the last six months (3). So what happens to our food system without migrants?

First of all, it is not feasible that the UK’s domestic population could or would fill this enormous gap. There’s a reason that these jobs are filled by migrants: the business model in various parts of the food supply chain necessitates precarious employment and for many migrants it is the least bad of the options they face.

The more likely outcome, then, is that business models will have to change. We may see a drive towards greater automation of particular tasks to obviate the need for cheap labour. Agri-robotics companies will see immigration controls as a market opportunity, while food manufacturers will suddenly find it relatively more profitable to invest in computerisation.

But not all businesses will have the capacity to invest in new ways of producing – they will face two options: merge with another business to survive, or cut losses and shut down. That would mean jobs disappearing in our biggest manufacturing sector, for British workers as well as migrants, and would leave us with larger, more powerful companies dominating what’s left.

Unless this scenario leads to astronomic productivity improvements it is more than likely that we will produce and process less food in the UK, importing more from other countries. Of course, this future scenario is also one in which trade is likely to be more expensive, with new barriers and tariffs potentially cropping up between Europe and us. Add to that the increased cost of imported inputs because of the fallen pound and you get a double whammy: a crippled industry and more expensive food. Welcoming migrants is both the right thing to do for its own sake, and economically sensible.

Shutting out migrants from our food sector, or indeed any sector, will not improve everyone else’s life at work. But it will cause unnecessary harm to fellow Europeans and our own economy, not to mention our dinner. Our post-Brexit strategy must be to strengthen our economy by welcoming migrants, while ensuring that they and we enjoy the highest standards in our working conditions and strong rights to challenge employers that don’t deliver.