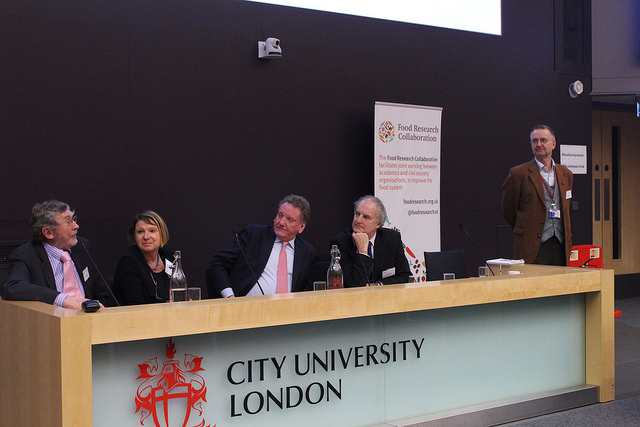 On 14 December, City University London and the Food Research Collaboration hosted the 2015 Food Symposium: “UK, Food and Europe: In or out?” In view of the planned British referendum on EU membership, this year’s Symposium focused on the possible food sector consequences of an exit from the European Union.

A variety of speakers approached the topic from many different angles: implications for food manufacturing, food service and farming were discussed, as well as the impact of Brexit on food safety, economics, environmental policy and animal welfare. The programme also included sessions explaining current EU influence and policy mechanisms, and the Scottish perspective on Brexit.

A common theme that emerged from the day was the presence of many unknowns in the Brexit equation, since any scenario following an exit from the EU would have to be negotiated and not simply dictated by Britain. Several presentations underlined that Brexit would not mean an escape from EU bureaucracy, as Britain would still have to comply with EU standards in order to continue to trade with Europe, but it would no longer have a place at the table that decides these standards, and ‘if you’re not at the table, you’re on the menu’.

Speakers saw a lot of room for improvement in current EU policy, but also clear benefits to membership, from the Union’s role as a regulator on the Single Market to the contribution of migrant labour to the UK food industry. Still, many organisations are reluctant to take a firm public position in such a divided issue. These and other perspectives on the topic were debated at length, as the programme allowed ample time for discussion between speakers and audience members.

Attendees were also able to express their point of view through a live poll, before and after the event. A majority of those who voted were against leaving the European Union, but they were not as strongly convinced that the general public would agree with them. Before the Symposium started, most audience members did not think that food would play a major role in deciding the issue; by the end, however, the talks convinced many of them to change their minds.

You can see photos from the event on our Flickr account; videos of the full talks, as well as slideshow presentations, will be uploaded online in the New Year. The Food Research Collaboration hopes to continue exploring the food implications of the Brexit referendum in 2016.