This report is the third in our Food Brexit Briefing series. It argues that the absence of serious consideration of food flows into, out of and through Northern Ireland is a significant policy omission in the ongoing Brexit negotiations. There has been much talk of the importance of Northern Ireland, but next to no detailed attention to the food implications of Brexit for Northern Ireland. The report makes the case that there is an urgent need to get down to detail over border arrangements, contingency planning and resource allocation. This is too important to leave to last-minute makeshift or muddle.

Food is central to the economy of Northern Ireland, and the continuing supply of safe, high quality, healthy food is currently dependent on the absence of border controls between Northern Ireland, the Republic of Ireland, Great Britain and the rest of the European Union. Hundreds of thousands of tonnes of food criss-cross these borders every year. They are currently free from inspection because of shared, underpinning EU Single Market regulation. An unplanned or mishandled food border imposition is likely to have powerful, destabilising consequences for the integrated nature of food supply, trade and access within Northern Ireland for many years to come. It would raise important challenges for food safety, put jobs at risk, potentially constrain Northern Ireland’s access to health-supporting foods such as fruit and vegetables, and create opportunities for food fraud and crime.

The report, by Gary McFarlane and Tony Lewis, both senior environmental health professionals and officers of the Chartered Institute of Environmental Health, and Professor Tim Lang, of the Centre for Food Policy at City, University of London, is based on a thorough review of food flows into, from and through Northern Ireland, and the practical experience of its authors.

The report dismisses talk of ‘technological fixes’ to help maintain the smooth flow of goods as vague, unavailable now and unrealistic. It calls for all the governments and bodies involved in food and Brexit – the European Union, United Kingdom, Republic of Ireland, Scotland, Wales and Northern Ireland itself – to set political differences aside in order to resolve the considerable practical challenges of cross-border food traffic. The authors make more than 30 recommendations to help that process. 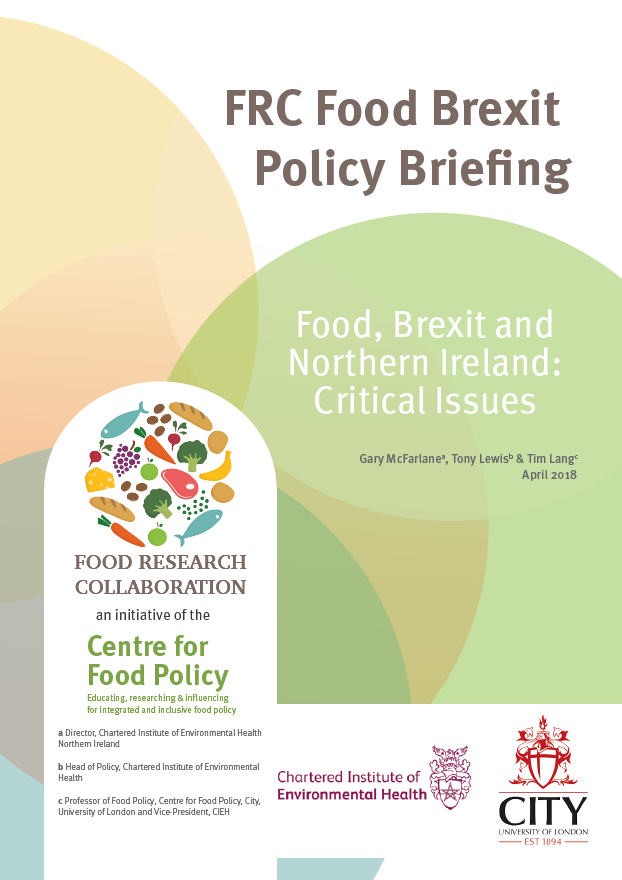 As Director of the Chartered Institute of Environmental Health in Northern Ireland, Gary works with government, local authorities, universities, non-governmental organisations and the private sector to develop ‘healthy’ policy. Much of this work seeks to highlight the critical links between environment and health in the context of sustainable development and public health. He has written and presented on these topics at regional, national and international level. Gary has extensive experience of food safety and standards through previous appointments in the Environmental Health service in NI. He has also recently served as a member of the SafeFood all island Scientific Advisory Committee. He was involved in setting up the Belfast Food Network, which recently helped Belfast City achieve the bronze Sustainable Food City Award. He was the inaugural Chair of its Advisory Board and remains an active Board member.

Tim Lang has been Professor of Food Policy at City, University of London, Centre for Food Policy since 2002. He founded the Centre in 1994. After a PhD in social psychology at Leeds University, he became a hill farmer in the 1970s in the Forest of Bowland, Lancashire which shifted his attention to food policy, where it has been ever since. For years, he’s engaged in academic and public research and debate about its direction, locally to globally. His abiding interest is how policy addresses the mixed challenge of ensuring that food is good for the environment, health, social justice, and consumers. What is a good food system? How is ours measured and measuring up? He has been Vice-President of the Chartered Institute of Environmental Health (since 1999).