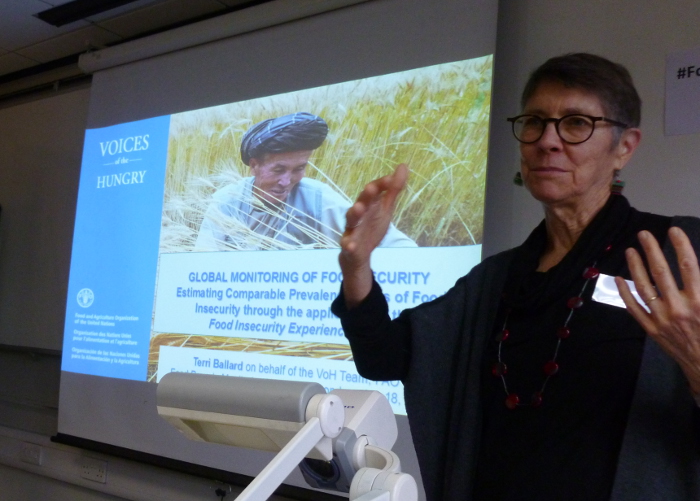 On 18 January, the Food Research Collaboration hosted a roundtable on food poverty, jointly organized with Sustain, the Food Foundation, Oxfam, and the Sociology Department of Oxford University. A gathering of campaigners and academics at City University London in January agreed on the need for a standard, quantitative measure of food insecurity in the UK.

The meeting heard presentations on the history of efforts to measure hunger and food poverty, on the pros and cons of national measuring, on the experience of the devolved UK governments (all of which have made efforts to collect quantitative data on food poverty), and on models of measurement which have been successfully used by the Food and Agriculture Organization of the UN and the Canadian government, respectively.

Decades of research have yielded an abundance of rich qualitative data on the experience of living in food poverty. This has been supplemented, on a piecemeal basis, with quantitative information culled from various formal and informal surveys, applied at UK, national or sub-national level. The issue has attracted attention recently because of the rise in charitable food provision, notably food banks, but the workshop heard that food bank use cannot be taken as a measure of food poverty. Information on food bank use is not systematically collected, and in any case not all those in food poverty will choose to use, or have access to, food banks. Data from Canadian monitoring showed that only a fifth of those in food poverty made use of food banks.

Quantitative data should not supplant qualitative research (which is especially useful in capturing the social and psychological dimensions of food insecurity). However, standard monitoring of food insecurity (for example via national surveys) would provide policy makers with the quantitative data they often call for, and would allow campaigners and researchers to track the problem over time and to assess the impacts of policy interventions. The types of quantitative survey used elsewhere produce fine-grained data not just on the prevalence but also on the degree of food poverty experienced, on the distribution by region or population segment, and on triggers or associations with specific risk factors – all highly relevant to policy development.

There were presentations on the experience of using survey questions based on the EU SILC (Statistics on Living Conditions), the FAO’s Food Insecurity Experience Scale (FIES) and Canada’s Household Food Security Survey Module. The latter has been in use for more than 10 years and has yielded data which have ‘transformed the debate’ on food poverty in Canada, and have led to targeted policy responses in some provinces.

Participants discussed various objections to measurement. It could divert resources from solutions to more research, or produce ‘evidence’ that would not necessarily lead to policy solutions, or distract attention from the wider problem of poverty. By narrowly identifying food poverty as a ‘food issue’ it could seem to endorse food-based responses and allow underlying structural and social factors (such as low income levels or inadequate social security provision) to be sidestepped.

On balance, however, it was felt that a standard measurement would be welcome, and the collaboration agreed to take the matter forward by:
• producing a report making the case for a measurement;
• conducting further talks with practitioners in England, Scotland, Wales and Northern Ireland to agree the most appropriate and practicable set of questions;
• and explore the logistics and cost of initiating a regular survey in the UK.

The workshop was jointly funded by the FRC, Oxfam and the ESRC Impact Acceleration Account at Oxford University.