This is the first post in our new ‘Brexit Briefings Update’ series. Each article will revisit a policy area we covered in our FRC Brexit Briefings to catch readers up on any developments that have taken place since publication, giving an overview of where things stand and how we might go forward.

Three years after the EU referendum, we are still unclear what form Brexit will eventually take and how this will affect the UK’s trading relationships with the EU and the rest of the world. We need to ensure that animal welfare remains on the agenda in these negotiations.

The Government’s commitment to protecting UK farmers and animal welfare standards from low welfare imports remains equivocal. Encouragingly, it has accepted a Lords amendment to the Trade Bill which provides that the UK must maintain its levels of statutory protection for animal welfare and the environment, when implementing trade agreements.

However, the Trade Bill only applies to trade agreements that are successors to agreements to which the UK was a party as an EU member. We now need a law which provides that all trade agreements must enable the UK to require food imports to meet UK standards on animal welfare, the environment and food safety. MPs have tabled amendments to this effect to the Agriculture Bill, but whether the Government will accept them is another question.

Another way of protecting UK farmers and welfare standards is by maintaining post-Brexit import tariffs at the levels they were, when the UK was an EU member. Here the Government has been immensely disappointing. In March it announced that in the event of a no deal Brexit, import tariffs would be reduced except in the case of sheep meat – indeed, for eggs and egg products import tariffs would be reduced to zero, leaving our farmers exposed to imports of battery eggs and egg products from battery hens even though barren battery cages are banned in the UK and EU.

Trade deals and policies that promote low quality imports could also undermine the dietary health of the most deprived members of society who have little option but to buy the cheapest food available. The least well-off could become increasingly reliant on inhumanely produced food of poor nutritional quality.  As iPES Food states: “Cheap calories can no longer be used as a substitute for social policies, which must be rebuilt and redesigned to tackle the root causes of poverty and promote access to healthy food for all”.

I welcome Michael Gove’s commitment to achieving gold standard animal welfare in the UK. His introduction of mandatory CCTV in slaughterhouses is an important measure. But I am not sure that Defra recognises the scale of the challenge ahead if we are to achieve gold standard welfare. 44% of UK laying hens are kept in enriched cages which are only a little better than the banned barren battery cage. Defra shows no willingness to emulate Germany and Austria in prohibiting enriched cages.

Over 50% of UK sows are confined in farrowing crates while giving birth and until their piglets are weaned at 3-4 weeks of age. These crates are so narrow that the sow cannot even turn round. UK scientists and farmers have developed alternative free farrowing systems that give sows more space and that can keep piglet mortality as low as in crates.  But Defra shows little sign of being prepared to phase out farrowing crates by law.

Nor does Defra seem willing to tackle the dairy sector, where around 20% of cows are zero-grazed, meaning that they are confined indoors all year round even during spring and summer. Around 95,000 male dairy calves are shot shortly after birth each year. In addition, the UK appears to be unwilling to ban live exports for slaughter and fattening even once it is no longer subject to EU free trade rules. Defra sets food procurement standards for the public sector but, regrettably, its welfare standards are lower than those of McDonald’s. And Defra maintains its refusal to introduce mandatory labelling of meat and milk as to farming method, leaving consumers in the dark.

Disappointingly, Defra supports gene editing of animals, which presents substantial threats to animal welfare. It will be used to make animals better able to cope with being factory farmed and to push them to higher yields even though their present high yields result in serious health problems. Support for gene editing seems to be part of Defra’s over-reliance on high-tech to reduce the impact of intensive farming. New technologies have a role to play, but in some cases there is a danger that in making damaging systems to a degree less harmful, agri-tech will cement in place approaches that are inherently damaging. For example, precision farming can enable better targeted use of agro-chemicals.  However, the resulting reduction in the use of pesticides does not convert intensive farming into a form of farming, such as agroecology, which is positively beneficial to natural resources. 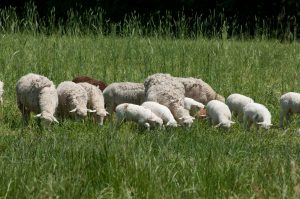 Perhaps, underscoring Defra’s reluctance to genuinely reform animal welfare, is an adherence to a narrow concept that views animal welfare as being good as long as negative factors (e.g. lameness and high mortality rates) are avoided. Defra needs to more fully embrace the concept that has been developed over the last 10 years that good welfare also entails providing animals with the opportunity to have positive experiences such as pleasure, interest, confidence and a sense of control.

Indeed, more broadly, our society needs to recognise that the barren, stressful conditions in which many animals are farmed epitomises humanity’s lack of respect for our fellow creatures and the planet we share with them. This is at the heart of our damaging impact on climate and the environment as well as our role in the decimation of biodiversity and wildlife.  We need – rather rapidly – to develop fresh attitudes that value our universe for its own sake and that recognise that animals, to quote St Basil of Caesarea, “love the sweetness of life even as we”.

Read Peter Stevenson’s FRC Brexit Briefing, published in June 2018, on ‘A better Brexit for farm animals: what the Government must do to protect welfare standards‘.