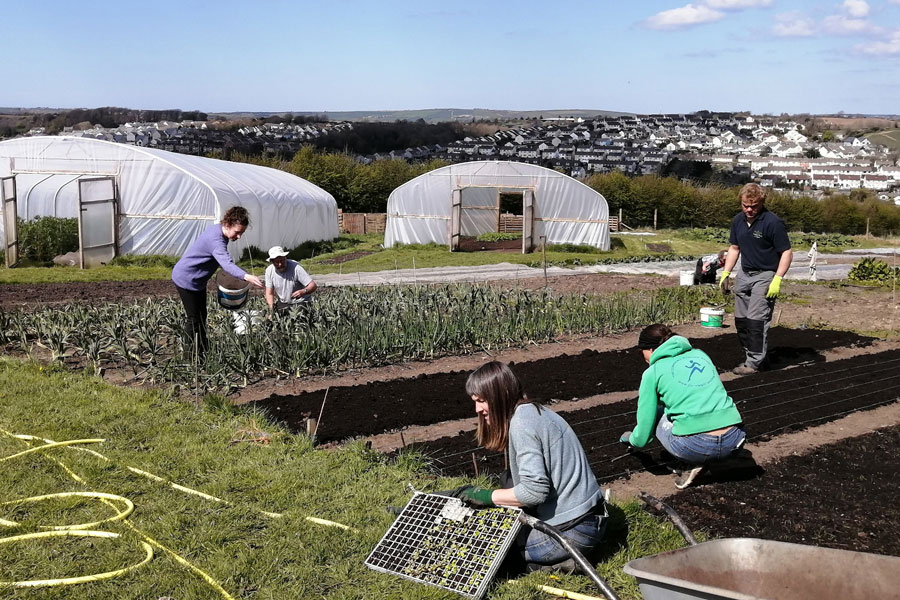 In this series of guest blogs, Suzy Russell, Network Coordinator of the Community Supported Agriculture (CSA) Network, describes the business models of some of the CSAs in their community. CSAs are a partnership between farmers and consumers in which the responsibilities, risks and rewards of farming are shared. Here, in the first blog of the series, Suzy introduces Camel CSA.

Camel Community Supported Agriculture (CSA) is a not-for-profit scheme near Wadebridge in north Cornwall. Set up in 2008, it was the first CSA in the South West. It grows vegetables for 85 local households within a 10-mile radius, using agroecological principles and no-dig methods. Camel CSA uses the proceeds from its monthly subscription prices to pay the wages of four permanent part-time growers and to cover the cost of seeds, organic fertiliser, rent, insurance and basic equipment.

Camel CSA’s vision is to make organically grown local food available to all. Charlotte Barry, one of its founding members, described how it began:

“Our CSA was started by a group of local organic growers who were involved in the Transition Town movement and keen to set up a community food-growing scheme. They got support from the Soil Association to hold a public meeting. About 40 people turned up and elected a steering group. That’s where it all began.”

Initially, the group rented a large field from a local farmer who waived rent for the first year while they all worked voluntarily. The veg box scheme got underway in June 2009 with just 15 members.

In 2020, Camel CSA completed its move to a new, permanent site at Treraven Farm, owned by environmental charity the Gaia Trust. There are now more than 85 subscribers and a long waiting list for membership.

Grant funding for initial infrastructure like polytunnels, packing shed, equipment storage and tools came from the National Lottery Local Food Fund and the European Agricultural Fund for Rural Development in 2010, backed by expert advice from the Plunkett Foundation. Since 2013, Camel CSA has been totally self-sustaining.  Annual turnover in 2020-21 from monthly subscriptions for a weekly veg box was £39,000. The growers are all part time (1.4 full-time equivalent). Camel CSA attracts around 30 regular volunteers who assist with admin and veg growing (1.3 FTE).

Two thirds of the sales turnover go on the growers’ wages. Around 15% is spent on buying in vegetables from other local producers. The rest goes on equipment, seeds, organic fertilizer, compost and maintenance, plus insurance, accounting, web support and consumable items.

Membership subscriptions are £65 a month for a weekly standard veg box delivered to home or workplace by bicycle courier or solar-powered electric van. There is a £4-a-month discount for members who collect their box from a pick-up point.

New members are offered a four-week trial to help them decide whether subscribing for a regular supply of fresh, seasonal veg works for them. If they sign up permanently they are asked to pay monthly in advance and give a month’s notice if they decide to leave. Alternative payment methods are available, including Healthy Start vouchers.

Camel CSA is a Community Interest Company (CIC) limited by guarantee, so any profits are ploughed back into the venture. Members get an equal share in the vegetable produce and are invited to take part in voluntary activities. These include growing, picking and packing veg as well as various administrative tasks for those who aren’t so keen on getting their hands dirty.

An elected volunteer core management group deals with the day-to-day administration. The paid expert growers work with the volunteer growing team to produce the vegetables. The volunteer picking and packing team work alongside the growers to share out the weekly harvest and prepare the veg boxes every Friday.

Camel CSA also offers support and informal training to vulnerable adults and young people who want to share in the growing experience. Some come to the CSA via local charities or support agencies. Others arrange to take part on an independent basis.

The relationship between the volunteer management group and the growers is a key to Camel CSA’s success. Decisions are made consensually and everyone feels involved.

Charlotte says, “We all share a love of CSA more than anything else and we manage to keep our sense of humour in the face of all kinds of challenges. We’re a mixture of ages – from 35 to 70. The community-led nature of the CSA brings fresh minds to problem-solving as well as useful experiences and insight from outside the food and farming world.”

She says that with hindsight, if they were starting again, they would endeavour to factor in some paid administrative support from the outset. They’re proud they’ve managed to keep going for so long and can set an example for others to follow.

Rather than expand its own membership, Camel CSA is keen to support other similar ventures setting up in Cornwall. As a model of growth by proliferation rather than growth by size, this sits very well with the cooperative and mutually supportive nature of the CSA movement. Cornwall now has the highest concentration of CSAs in any county in the UK – a grand total of 13.

The Community Supported Agriculture (CSA) Network UK is the only organisation dedicated to supporting and promoting CSA in the UK, working towards a fair, sustainable and resilient food system.

To find out more about CSAs and the CSA Network, follow this link.

Suzy is Coordinator of the CSA Network UK. Suzy has a background in community development, environment, facilitation and creative practice, a love of good local food and a passion for our planet. She combines these skills and passions to support CSA farms to thrive and build a better food and farming system.