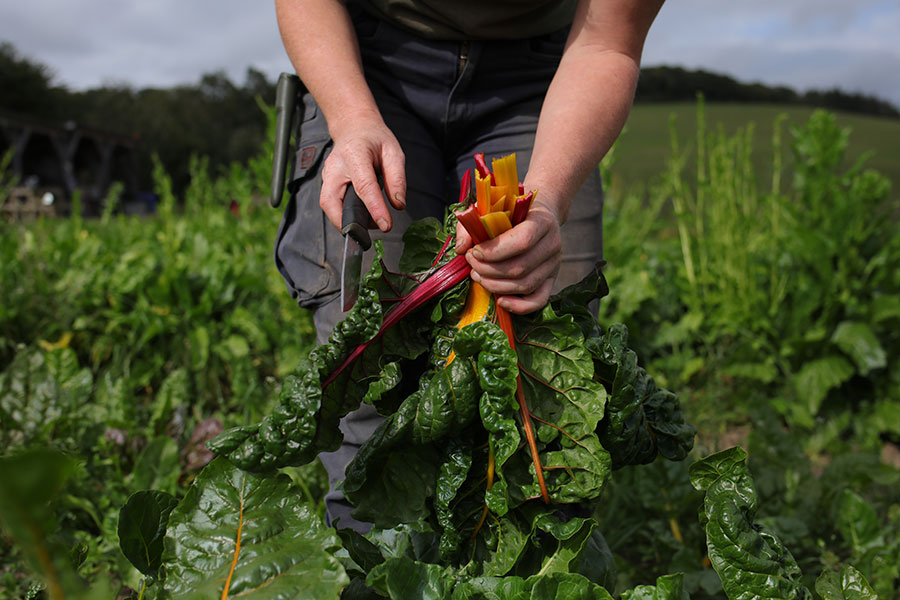 In this series of guest blogs, Suzy Russell, Network Coordinator of the Community Supported Agriculture (CSA) Network, describes the business models of some of the CSAs in their community. CSAs are a partnership between farmers and consumers in which the responsibilities, risks and rewards of farming are shared. Here, in the second blog of the series, Suzy introduces Chagfood Market Garden.

Chagfood Market Garden is a CSA scheme based in Chagford in Devon. They grow and supply vegetables for more than 140 local households, all located within 10 miles of the site, using organic principles. The project’s vision is:

“to supply fresh, seasonal, organic vegetable shares to the residents of Chagford and our neighbouring parishes at an affordable price.”

It was established in 2010 as a Community Interest Company (CIC) by Ed Hamer, his partner Yssy and two other co-founders. The CSA now grows on seven acres of rented land owned by local farmers, having started with much less and gradually increased the area in step with their membership. In 2020 they transitioned to a Limited Company as it more accurately reflects the day-to-day running of the business as a family enterprise.

Ed and Yssy were interested in starting a farm in their local community to create a livelihood for their family. They chose the CSA route after Ed visited several CSAs across the UK, which convinced him that CSA was not only an ethical choice but also made sound economic sense. Their beginning coincided with a meeting in their town, organised by the think-tank the New Economics Foundation,  which identified a clear demand for local produce. After a year of holding community meetings to assess demand, the project was given a further boost by funding from the Big Lottery Fund’s Making Local Food Work scheme.

In the first year, they grew for 25 households on one acre. In the second year, they took on another acre and increased to 50 ‘shares’ a week. (Each subscriber earns a share of the produce in return for the money they pay in.) They continued increasing gradually up to six acres and 75 households. In 2015, having reached a plateau in membership numbers, they reviewed different options for reaching an aspirational target of 100 members. They had always been committed to growing everything that went into their shares themselves and had always stopped production in the hungry gap. However, after a visit to another, established CSA which was producing year-round shares, they decided to make some changes. In 2016 they introduced year-round shares and went from 75 to 95 members. In 2018 they began offering door-drop for £2 a week extra and membership went up to 110. By 2021 – largely as a result of increased demand during lockdown – they had increased to 148 members.

Their capital start-up costs were just under £17,000 and the first year they spent £39,000 on revenue costs, whilst they took £7250 from their 25 shares. Ten years in, their turnover was £80,000 (mostly from CSA shares with a small amount of wholesale) and they were comfortably paying two full-time wages, which accounts for around half their turnover. The remaining £40,000 is spent on growing costs (around £10,000), capital costs (around £10,000) and administrative and operating costs (around £20,000). Ed and Yssy both work full-time on the CSA and they have two full-time trainees. They also have five regular volunteers who together contribute around one full-time equivalent (FTE).

For the first ten years, various small grants helped balance the books and allowed them to do additional work with volunteers and local schools. Becoming financially independent, which they achieved after 10 years, has been their biggest challenge.

They have always offered 10% of their shares at a subsidised rate, encouraging other members to pay slightly more to cover the costs of the subsidy. They have also been able to offer two entirely complimentary shares this year thanks to a member who kindly offered to fund them. These have been prescribed to two local families anonymously through the local doctor’s surgery.

Ed has always been keen to promote the CSA model and runs an annual “Introduction to CSA” residential training course as well as writing for various publications and speaking at events. His advice to those looking to start a CSA is “just get stuck in, get started and don’t be afraid of asking landowners to rent land.” He says that the things that would make their life easier are a cold store and for DEFRA to recognise the numerous public goods that CSAs deliver and to reward them for that.

He says that he feels better supported than he expected: “The CSA model provides an enormous amount of support from the membership and customer loyalty to the business. We’ve also been pleasantly surprised by the level of community engagement in terms of volunteers and support for social events.”

Ed says he wishes he’d known that they didn’t need to panic about growing membership – it has just continued to grow and now they don’t want to grow any further. The pandemic showed the integrity of the model for them and now they are concentrating on maintaining membership, improving quality year-on-year and streamlining cultivation systems. They want to grow the best veg possible.

The Community Supported Agriculture (CSA) Network UK is the only organisation dedicated to supporting and promoting CSA in the UK, working towards a fair, sustainable and resilient food system.

To find out more about CSAs and the CSA Network, follow this link.

Suzy is Coordinator of the CSA Network UK. Suzy has a background in community development, environment, facilitation and creative practice, a love of good local food and a passion for our planet. She combines these skills and passions to support CSA farms to thrive and build a better food and farming system.