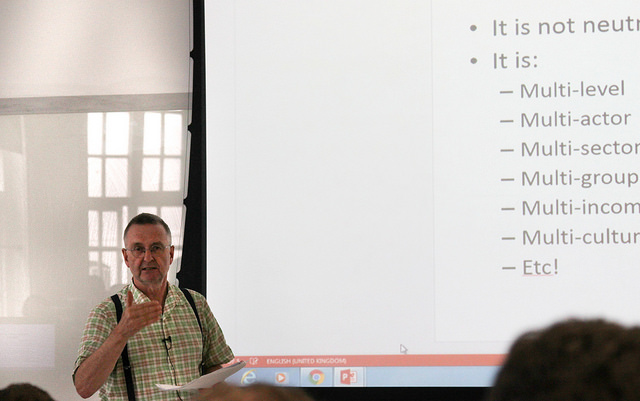 A remarkable coalition of world cities signed an Urban Food Policy Pact in Milan’s splendid Palazzo Reale on October 15 and presented it to Ban-Ki Moon, UN Secretary General, in New York the next day, World Food Day, October 16. Signed by 100 cities on all continents, the Pact (http://www.foodpolicymilano.org/en/) signals the return of city regions as powerful voices in modern food policy. Many have been auditing how they are fed. They now recognise their food systems are in a delicate state even when the surface looks fine. Health and environmental impacts are high. Geopolitics are tricky. Aspirations for cheap food have become hard-wired into consumer expectations. Waste is rampant. Governments bow too much to giant food companies selling sugary, salty, fatty, ultra-processed food. Marketing budgets dwarf food education. No-one seems to be in overall control.

Enter city regions. All over the world city councils are waking up to their role in this. They helped sort out the 19th century mess of food adulteration and hungry populations. Must they do it again for the 21st? Cities celebrate and innovate in food culture, yet are dependent on others to be fed. They are powerhouses of work but parasitic on cheap labour on the land. Their budgets are squeezed but their diet-related costs are rising. Their dense populations could be energy and food efficient but require huge infrastructure and change to be so. When cities look to national governments, they are met by blank stares or ‘your problem’. A new urban politics is emerging, gradually recognising the need to move beyond the neoliberal era’s commitment to cheap and plentiful food which has only spawned an horrendous new set of challenges which it cannot resolve. Many of these drop onto locality’s doorsteps.  Waste. The new food poor. Rising obesity. Street litter. Inequalities. Low waged food work. But the positive news about a sustainable future needs to be grasped. Closer foodways, better jobs, healthier populations.

One motive behind this week’s food policy pact was climate change. The C40 group of World Cities which started years ago to consider the local dimension to climate change realised that unless the food system changes, there’s little hope of reducing Greenhouse Gas emissions. London’s audit of its footprint found food to be a top source. The Milan Pact goes wider than climate and recognises food’s social and economic role.

The Pact’s objective is broadly simple: better collaboration to shape resilient, sustainable local food supply chains and good food cultures, living within environmental limits. Across political divides, around the world, mayors and councils know big change is needed. It’s why the range of signatories is so moving: Dakar to Windhoek, Moscow to London, Shanghai to Sao Paolo. (http://www.foodpolicymilano.org/en/the-cities-of-the-milan-urban-food-policy-pact/)  They commit to develop methods for auditing their food systems, prepare local sustainable dietary guidelines, and share democratic experiments. Take diet. Just what is a good 21st century diet? Clarification is sorely needed. Public health bodies have tried to include environmental dimensions to nutrition guidelines, but been beaten back or made to water it down by ferocious counter-lobbies from meat, dairy and big farming interests.  In Australia, Sweden, Netherlands, UK, and now in the USA, these lobbies want to encourage more of the Western diet, derail scientific input to shape better food systems, despite the need to re-engineer food systems to reduce the health and environmental toll on people and planet.

The evidence is strong. In the developing world too many people die of hunger and poor sanitation. Obesity and overweight is growing rapidly almost everywhere.  Diet-related diseases are now the greatest contributors to the global burden of disease with newly affluent middle income countries carrying the biggest burden ahead.  Affluence and trade liberalisation allowed the ‘burgerisation’ of food cultures. Tastes are remoulded in a few decades. There is overproduction, intensification and misuse. 50% of grain grown feeds industrialised animal factories whose meat and dairy system now threatens capacity to eat sustainably. There is too much food in the wrong places at absurdly low prices from which the people who grow it are increasingly the losers.

A vast body of such evidence about the slow food car crash underpinned this month’s UN signing of the Sustainable Development Goals (SDG). (http://www.un.org/sustainabledevelopment/sustainable-development-goals/) The SDG 17 goals are translated as 169 targets, 70 of which involve food. If we don’t sort out the food system, any notion of a good future is in doubt. New techno-imperialists whisper sweet nothings into politicians’ ears, offering another bout of technical intensification to keep this show on the road. This is not just genetic modification, which is already in trouble, yoked as so much is with use of glyphosate, the herbicide previously deemed benign but now in trouble as a probable carcinogen. There’s a raft of new technical sectors offering food fixes: robotics, nanotechnology (putting minute particles into food); synthetic biology; Big Data and the information revolutions; the promise of personalised healthcare applying life science wizardry. Underpinning them all is continued reliance on but nervousness about oil-based fertilisers. It was they who kept the food wheels turning at the last big moment of reflection in the mid 1970s.

Although the motives for the Milan Pact is partly frustration. Governments are quietly ignoring the food challenge. After the 2007-08 commodity and banking crisis, momentarily it looked as though better policy frameworks might emerge. The crab-like European machine began to generate a Sustainable Consumption and Production (SCP) framework. The new Commission commodity elected in 2014 summarily dumped the Sustainable Food Communiqué ready for signing.

Cities are now the frontline over what to do about consumption. Consumers are the elephant in the food room. Is it progress for cities to fill streets with endlessly food offers (to get into my local big station, I pass 30 opportunities to nibble or eat)? What’s a good urban food culture? Can we let fast food joints surround schools like hyenas? What powers are needed to recalibrate urban food culture for 2030? Must we consign workforces to ill-health? If governments are fudging this or, as in the UK, ceding the thinking to a belief in ‘markets’ (when real markets have been driven out), the new Cities movements are now debating what they can do.

They are right to do so. The world is now majority urbanised. If national governments are frightened of food, or content to leave it to Tesco et al to shovel out cheap food, shouldn’t cities step up to the challenge? It’s there that the consuming mass exists. It’s there the food labour is now greatest in rich countries. It’s there that developing mega cities have massive problems – water, sanitation, food, waste, inequalities.

Britain, as first industrial nation, knows only too well the consequences of severing people from the land. We got away with it for a century by exploiting colonies. Cheap food for low wages for an urban working mass. World War 2 shook that policy package. We, like other Europeans, realised the need to support and rebuild farming. Hence the Common Agricultural Policy. Progressive then, a mess today. Then in the mid 1970s, neoliberal politics ousted benign but exhausted Keynesianism, honed in the UK by the two political giants Dennis Healey and Geoffrey Howe who have both just died. Now we need another package. But which is it to be?

Is it more Big Farming or more horticulture? And what sort? Plants not animals are the key to the new metric: how to feed people from declining available growing space. Ever bigger, more ruthless food corporations or more money getting from dependent urban consumers’ purses back to the primary producers? The schisms between big companies and millions of small enterprises is a key City challenge. The latter create jobs and diversity. And how can Cities help repair ecosystems on which humanity and food depend?

The new Pact seeks a greener, healthier, more equitable food system.  This needs a strong political voice that engages with and listens to consumers, but is firm about the need for change. The social maldistribution of food on a gargantuan scale that we have today is unacceptable. We need food systems based on full cost pricing, not cheap food and overflowing hospitals and denuded nature.

All hail to Milan and the 100 Cities.