Sowing the seeds for a new era of research and activism? – Raquel Ajates & Rebecca Wells

Sowing the seeds for a new era of research and activism?

From February to June 2016, the Food Research Collaboration (FRC) and the IFSTAL team from the Centre for Food Policy worked with the Gender and Sexualities Research Forum at City University London to co-organise a series of five seminars on Ecofeminism, Food and Social Justice. Food, as FRC members know, is a multidisciplinary subject and touches on many topics. Gender and the environment are two of these, but the links are often ignored.  In this series, activists and academic speakers came together to discuss how interconnections of gender issues, sustainability and the food system are interwoven in their research and campaigns.  To our knowledge, this was the first seminar series exploring the links between food and ecofeminism and we hope that the very interesting discussions and debates started during these meetings will continue. 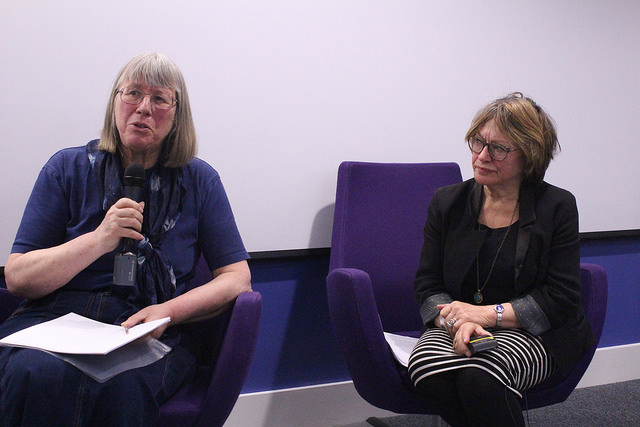 Seminar 1 featured Professor Mary Mellor and food journalist Sheila Dillon covering the history of Ecofeminism, from an essentialist stream that saw women as carers of nature, to the more materialistic ecofeminist political economy. Professor Mellor offered a fascinating analysis of modern economics, arguing their existence is only possible because of the exploitation of invisible and unpaid “female work” and nature’s resources and resilience. She discussed how capitalist societies create a labour market that favours an increasing disembodiment from our biological rhythms – such as sleeping and eating – and the disembeddedment, or humans’ distancing from nature and where our food comes from.  In a personal reflection on this, Sheila Dillon gave a captivating insight into her own relationship with food, from her childhood in rural Lancashire to her work as a feminist journalist in New York and then for BBC Radio 4’s The Food Programme.

Another feminist journalist, Rosie Boycott, was one of the speakers at Seminar 2. A founder member of feminist magazine, Spare Rib, Rosie is the Mayor of London’s Food Advisor. She argued that most early feminist ideology did not consider climate change and sustainability as it encouraged women out of the kitchen and away from domestic food production.  Supermarkets filled the gap left by women in households with “easy and quick to prepare” foods that are fueling an obesity epidemic and loss of cooking skills. Will women have to take the lead to get society cooking again? If so, this could be part of the ongoing free emotional labour to cover gaps left open by market economies. 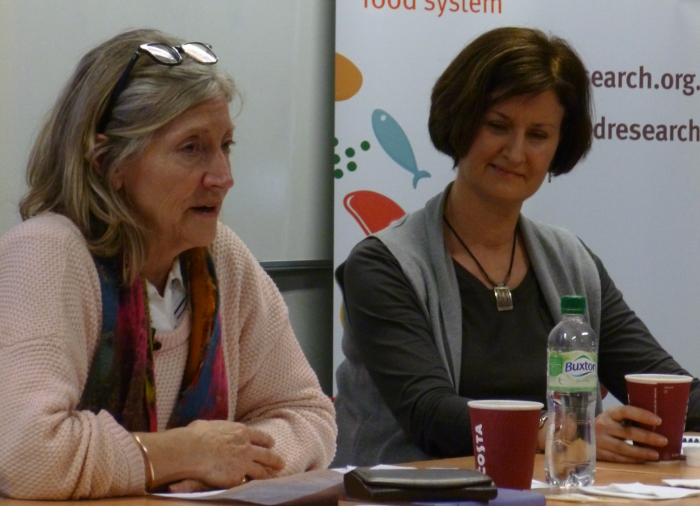 Broadening our horizons, Dr. Deborah Johnston from the School of Oriental and African Studies gave a presentation complementing Rosie Boycott’s, in which she outlined the results of some of her own research looking at farming and policy in low and middle income countries. This has shown that complex gender issues are often ignored by policymakers, despite the fact that we know gender relations fundamentally affect food outcomes in the home. The audience learnt that climate change affects poorer women in developing countries more than any other population group around the world. These effects are economic, as women often lose their means to make an income through farming, but also nutrition-related, as they regularly give up their share of food in order to feed other members of the family.

By now, halfway through the seminar series, a picture was emerging of the ineluctable connection between food and gender and how this impacts and has been impacted by climate change and ecology. Seminar 3 featured a visiting Professor at the Centre for Food Policy, Jane Dixon, from the Australian National University, who further outlined the gender divide and the massive links between food insecurity and inequality. Jane’s work showed us that low socio-cultural positioning puts women at a disadvantage especially in times of food insecurity. This, she argued, will become even more pronounced as climate change progresses. Gender inequalities impact both developed and developing countries, with male-dominated land ownership prevalent across the world.   What could be done to address some of these issues? asked members of the audience. Campaigner Kate Metcalf of WEN UK (the Women’s Environmental Network) joined Jane to talk about WEN’s projects which work with local communities to try to address some of these pressing and persistent inequalities through food growing, seed swapping and cooking workshops. 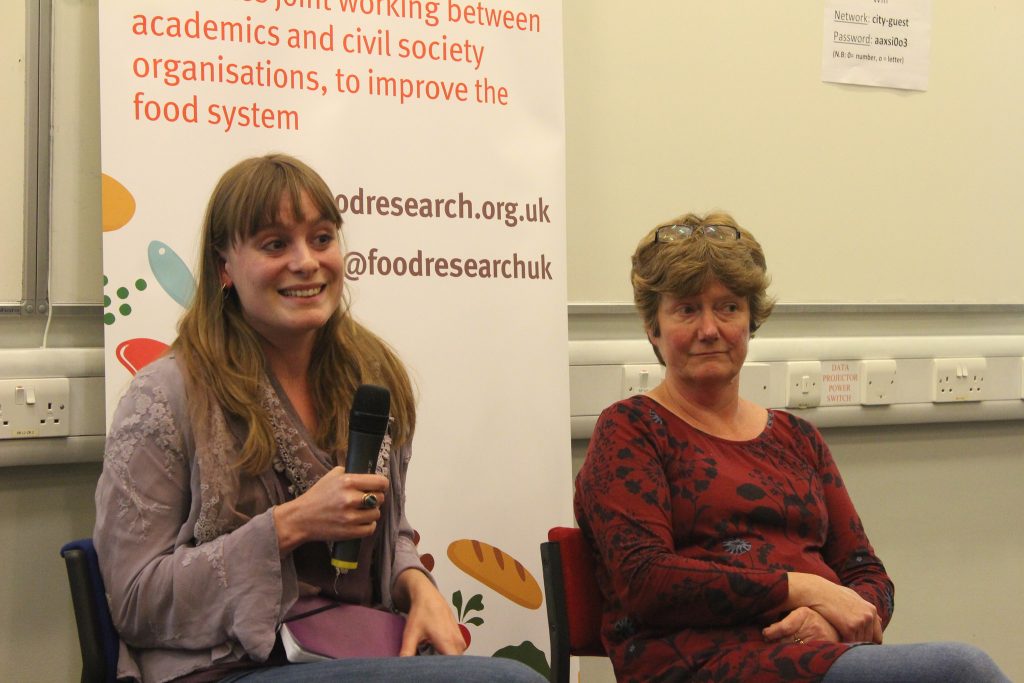 And there were more glimmers of hope as the series progressed. Seminar 4, with Dr Mary Phillips and Alice Willatt of Bristol University, examined feminist ethics of care as a practice of hope, which, they argued, can help us improve relationships and societal dynamics by respecting the fundamental interconnectedness of all life and seeing humans as part of, rather than independent from nature.  Mary Phillips talked about her own experience of ecological activism and highlighted the risks of corporate environmentalism and ecological modernism that fuels the privatisation and marketization of the natural world. Using her own PhD study, Alice Willatt presented her participatory action research project, which examined relationships in a community kitchen. Here she experienced eating and sharing food as an embodied visceral act and saw care as a form of resistance and practice of hope. 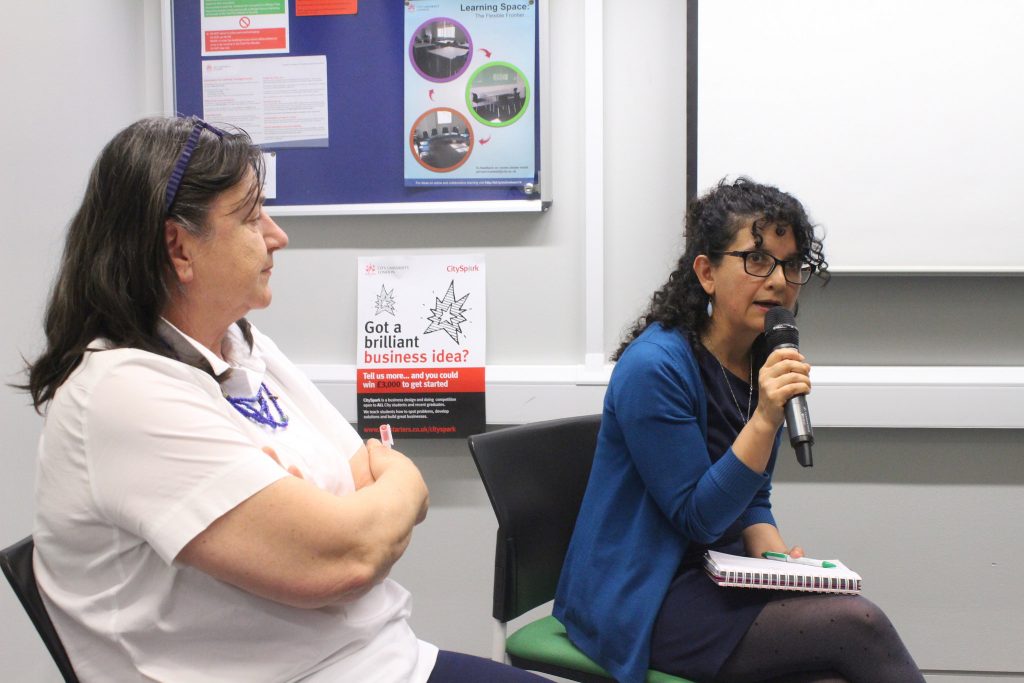 And so to the final seminar of the series, Seminar 5, featuring Hilal Elver, UN Special Rapporteur on the Right to Food and Graciela Romero, a doctorate researcher at the Centre for Agroecology, Water and Resilience at Coventry University. Elver discussed the importance and benefits of gender-sensitive climate change policies, not only for social justice but also based on the evidence that suggests these policies offer a more efficient use of resources with a higher impact.  She discussed the links between development and extractivism of natural resources and how these generate gender-differentiated impacts of climate change. Elver finished on an optimist note discussing the three streams of struggles converging: legal efforts (e.g. the Right to Food), social movements and technical agro-ecological approaches for a fairer and healthier balance between gender, natural resources and the food system. Graciela Romero presented a case study of women in Peru fighting to protect the land, on which their livelihoods are based, from corporate extractivism.  The series ended with Romero’s call for a paradigm shift to a new cosmovision based on the Andean philosophy of Buen Vivir (Good Living) that encapsulates the concepts of relatedness, complementarity, correspondence, reciprocity and cyclicality as the way forward, beyond female and male binaries, highlighting the urgency to recover and relearn our dependency on nature and on each other.

We are very grateful to the 10 speakers who gave up their time to talk to us and contribute to the series.  Thanks also to the audience whose questions prompted some very engaging and thought provoking discussions.

We aim to follow up this series with further projects on ecofeminism and food. Please use the space for comments below to get in touch if you have any questions or feedback about the series, or would like to be involved in future projects.