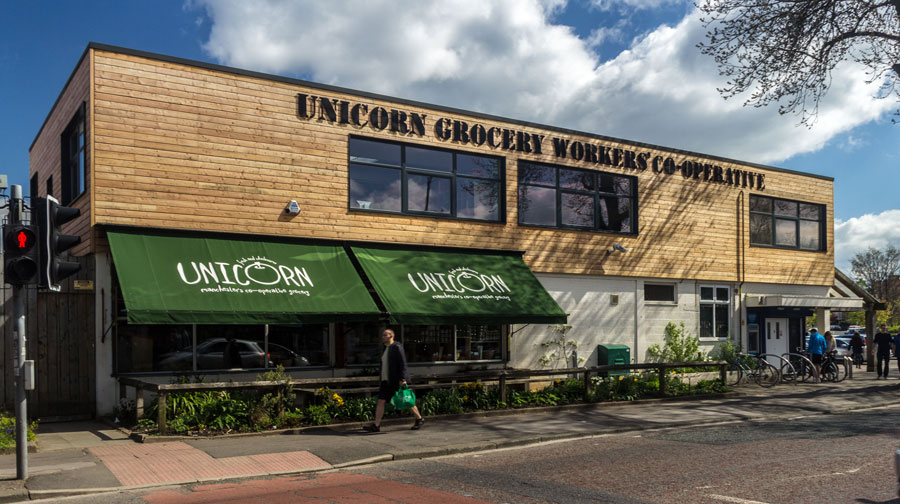 Dan Monks, co-op member of Unicorn Grocery, argues that small, organic food businesses will shoulder disproportionate costs due to Brexit, but applauds Unicorn’s long-term focus on affordability, which has thus far helped maintain a loyal customer base through the cost of living crisis.

Unicorn Grocery is a workers’ cooperative in South Manchester. It has been running since 1996 – but like other food hubs, it is now having to adjust to a post-Covid, post-Brexit ‘new normal’.

One concern, in the wake of Brexit, involves the introduction of ‘certificates of inspection’, now delayed to the end of 2023. A certificate of inspection is a document which certifies the condition of an imported commodity, at a cost to the importer. Now that the UK has left the EU, these will be required for fresh produce imported from Europe. Furthermore, certificates for organic produce incur a higher fee. For Dan, this feels like “an especially retrograde step”, as Unicorn has worked hard to promote organics as the future of food, and as affordable. “Suddenly, we have to pay more money to get the exact same produce over the border that we’ve been buying for 20 years,” she says. “It does feel unfair.”

On average, compared with pre-Brexit costs, Unicorn is paying approximately £150,000 per year more for fresh produce from the EU, to cover the costs of import and export declarations and customs fees. Dan says the paperwork is also a long-winded, difficult process, which feels like “writing code” for every consignment.

Furthermore, “we are disproportionately affected because of the size of the business,” Dan explains. “The fees are based on a single consignment of goods. For Tesco, this could be several container loads with hundreds and hundreds of pallets. For us, a consignment is a single pallet. Our bills are relatively much bigger than the supermarkets”.

A steady recovery from Covid-19

These costs fall on Unicorn in the wake of a few challenging years. Before the pandemic, Unicorn had witnessed steady growth for over a decade and 2019 was their best year yet. In 2020, the business was thrown between two extremes: with the announcement of lockdown in March 2020, there were two incredibly busy weeks of panic buying before the two quietest weeks ever, as people stayed home. However, their customer base remained extremely loyal and, with restaurants closed and little else to do, many people focused on cooking at home.

In 2021, Unicorn embarked on an extensive renovation and extension of the shop, which meant closing the shop (for the first time ever) and trading out of a smaller space while the works were completed. Since reopening, customer numbers are returning to pre-pandemic levels and they’re welcoming between 5000 and 6000 people a week.

While the rising costs of living are concerning for Unicorn’s employees, Dan has yet to see any direct impact on customer numbers. She attributes this to Unicorn’s long-standing dedication to affordability: customer retention is a clear point of pride.

She is realistic, however, that retail outlets haven’t felt the full force of the cost-of-living crisis yet, and anticipates that things will get worse towards the end of the year. She acknowledges the difficulty of balancing affordability for the customer against the true cost of production: “At the heart of it, we’re trying to debunk the idea that organic is the preserve of the luxury, it shouldn’t have to be. But sometimes it feels like a bit of an uphill struggle”.

“It’s scary because our costs are increasing across the board. We get an email every single day, from a supplier, from a haulier, from somebody, telling us about an increase in price. You get a bit numb to them.”

For Unicorn, confidence in their ability to weather these crises lies in their long-standing, and in Dan’s words, “brilliant”, relationships with suppliers. By paying their invoices promptly, Unicorn have got growers on their side: “Our suppliers really like us and respect us,” Dan says. It’s the quality of these relationships that has ensured that they haven’t had any bare shelves, or issues in the supply chain at any stage. She also observes how cooperatives tend to fare very well in periods of economic recession due to their resilient models: “During the 2008 crash, the business model proved very resilient. You do feel really vindicated, actually, in moments like this.”

Despite the difficulties ahead, Dan remains optimistic about the future of Unicorn. “Now, more than ever, we must champion an organic food system that is accessible to a broad customer base. Good food for all remains a brilliant motivator, and it’s one we’ll keep striving for regardless of the obstacles we face.”

Hattie Hammans is the Food Research Collaboration’s Research Officer. She is leading our research project on Sustainable Food Hubs, where she works with hubs across the UK to explore the role of values-led food infrastructure and short supply chains in the UK food system.