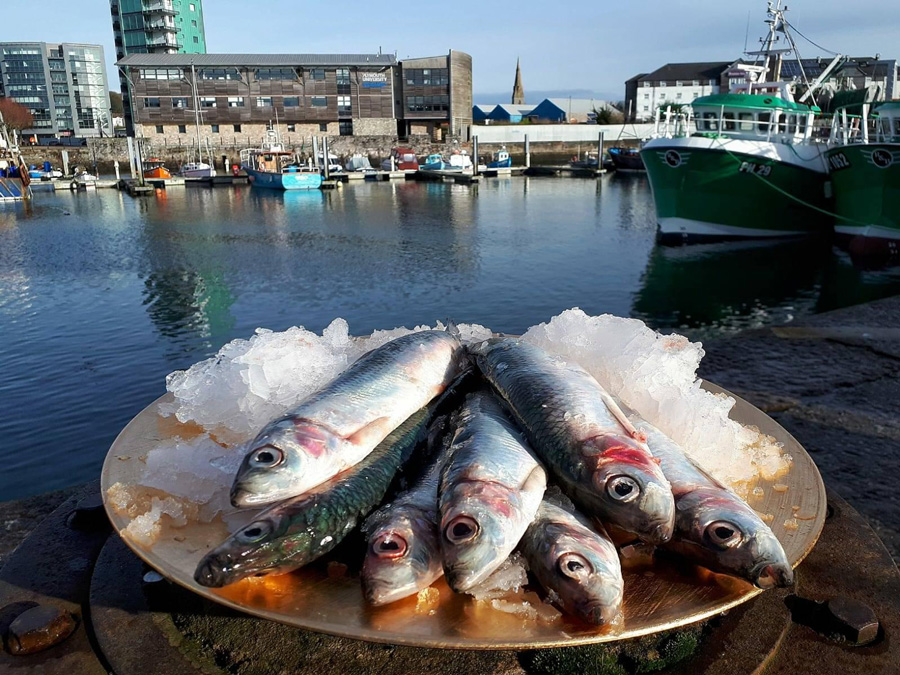 Herring caught by Graham on the Halcyon. Photo courtesy of Sole of Discretion Facebook.

In this series of guest blogs, Lynne Davis, CEO of the Open Food Network, describes the business models of some of the food hubs and producers in their community. Here, in the third blog of the series, she introduces Sole of Discretion.

Sole of Discretion is a radically sustainable and ethical fishmonger based in Plymouth. It works exclusively with small boats, ten metres or less, selling fish landed between Helford and Eastbourne. As a Community Interest Company (CIC) owned by ‘the skippers that own the boats’, Sole of Discretion is pushing the boundaries of the world of fishing in the UK.

Sole of Discretion was founded by Caroline Bennett, who identified the need when trying to source good quality fish for her Japanese restaurant. Since its successful crowdfunder and launch in 2016, it has grown to achieve a turnover of about £700k/year, primarily through the wholesale side of the business. It sells through retail shops, online distributors and directly to customers both online and at Billingsgate Fish Market. It now employs six full-time and one part-time staff member, growing from four staff members in 2019. The organisation is governed by a board of directors, though Caroline admits they have historically struggled to have fishers join the board: ‘They don’t understand that you aren’t financially liable if you become a director or shareholder.’ As the company becomes more profitable, things change and fishers are interested.

Since inception, Sole of Discretion has collaborated with the University of Exeter. Marine biology students work with the fishers at every step of the journey, to better understand fishing methods and their impacts, monitor fish stock numbers and reduce by-catch. The commitment to sustainable fishing is inspiring, but even with this level of concern, Sole of Discretion faces controversy. Programmes such as Seaspiracy have a noticeable impact.

Increasing the sustainability of UK fisheries means both changing fishing practices and changing buying practices toward the seasonal catch and lesser-known species. Sole of Discretion aims to shift consumer habits and grow new markets through communication. It gives cooking suggestions for lesser-known species and offers long descriptions of its products online, explaining why the fish is ethical and sustainable. The label on each pack reports the name of the fisher, name of the boat and method of catch. However, changing shopper behaviour is a huge challenge. Unknown fish species are unpopular and shoppers tend to go for fish they know. Almost half of Sole of Discretion’s sales are salmon.

‘We tried to wean consumers off farmed salmon,’ says Caroline, ‘but in the past our biggest buyer asked us to process farmed salmon – which is depressing but easy to work with, as it gives us a stable supply. However, thanks to meeting a fisherman from Alaska we now import wild salmon, enabling us to reduce the amount of farmed salmon to a very low proportion. We wouldn’t be able to do that without help from Slow Food Belgium, so yes, Brexit is an issue.’

While Sole of Discretion aims to grow the UK market, it has also sold into Europe, where there is a higher demand for many fish species caught in Britain. Due to Brexit, it now needs a vet to inspect all fish that is exported to Europe, which increases costs. Nevertheless, 2020 was the first year in its five-year history that the company made a profit. Prior to this, grant funding had enabled it to continue developing the model. Growth was both due to the increase in sales through the businesses it supplies, and a result of Plymouth Council adding Sole of Discretion to a list of local food suppliers during the first lockdown of the pandemic.

Sole of Discretion minimises general waste as a core value, but this can be a challenge. ‘Fish by-products aren’t saleable,’ Caroline explains. ‘We commit to blast freezing everything that isn’t sold on the day it is landed. Offal and roe are bagged up and sold. Few people like herring milt but we know one person who is a fan. Plenty of people like herring roe.’ Finding buyers for guts and frames (bones) is tough, so although these products could be ingredients, they go to a biodiesel company. One long-term vision to further reduce waste is to set up a cat food company, which could use the guts and frames.

Finding reliable distribution methods is an important challenge for the business. For direct sales to customers, Sole of Discretion sends produce mostly by mail order using external third party couriers. Its main issue is that it cannot find a reliable courier who can handle chilled distribution. Too many of the orders are mis-delivered. This results in refunds and wipes out most of the profit on direct customer orders. ‘The issue of distribution is key,’ Caroline says. ‘It’s always distribution that stops small-scale food producers from accessing the end shopper. Joining up all the small processors to create a distribution system would work. We need an answer for this.’

You can read more about Sole of Discretion in the Open Food Network case study, here.