From inflatable cows to COP 27: how can food be mainstreamed in international climate action?

From inflatable cows to COP 27: how can food be mainstreamed in international climate action? 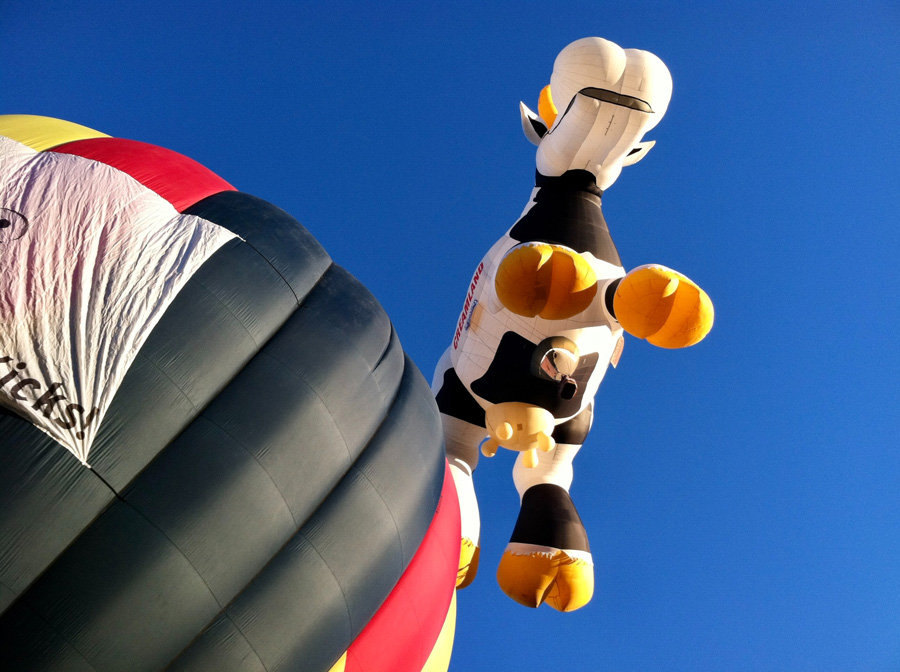 At the COP26 climate summit, food and agriculture were largely missing from the negotiations. But outside the formal discussions an eclectic group of messengers, ranging from the former UN Secretary-General Ban-Ki Moon to farmers, mayors and giant inflatable cows, were united behind a key message for governments: food systems must become a central part of international action to tackle the climate crisis.

How food is produced and consumed varies considerably according to continent, climate and culture. This makes it a tricky subject for an internationally binding legal framework – how can you regulate and reduce emissions when agricultural production varies so much and farmers’ realities differ so greatly? How can there be a framework that recognises that farmers are on the frontline of climate impacts but that regulates and reduces emissions from agri-food companies? These wranglings have meant that reducing emissions from the food and agriculture sector has been kicked down the climate road.

COP26 began to sow the seeds for international action on this agenda. Outside the formal negotiating rooms, political deals to end deforestation and curb methane emissions (agriculture is the biggest driver of both of these), policy pathways to transition to more sustainable agricultural practices and financial commitments to back a just rural transition were all announced. These initiatives demonstrate a level of political will, but critics note that they lack ambition, funding and legal teeth (they aren’t part of the formal Paris Agreement or Glasgow Pact).

So, what does putting food ‘front and centre’ of climate policy actually mean? Like all food policy, it’s a complex jigsaw puzzle. To steal a metaphor that was recently shared with me, as with any puzzle you need to get four corners in place first:

The science is clear. We can’t limit global temperature rises to 1.5-2 degrees without urgent action to reduce emissions from the food sector. We need a 1.5 degree pathway for food and agriculture which is reflected in countries’ national climate plans.

The latest research doesn’t inspire confidence. During COP26, newly released analysis showed that emissions from the food sector have risen by 17% since 1990 according to FAO data. Countries have also done little to reduce their agricultural methane emissions, a potent greenhouse gas.

Like the International Energy Agency’s global energy outlook, the agri-food sector needs a global, credible, annual stocktake of where we have come from and where we are headed.

The Paris Agreement on climate change required countries to submit their Nationally Determined Contributions (NDCs), their domestic plans to tackle climate change. These are then assessed to determine if the countries are on track to fulfil their contributions to keep global warming to well below 2 degrees.

But in an analysis of 15 countries’ plans by the Food and Land Use Coalition (FOLU), very few go beyond broad target setting to saying how they will operationalise their commitments. Glaring gaps include a lack of focus on dietary shifts, despite research showing that this is a key lever to cut greenhouse gas emissions, as FRC blogger Paula Feehan has also highlighted.

As one of the outcomes of COP26, policymakers will be required to update their national plans in 2022. This is an opportunity to ensure that food iswoven throughout countries’ NDCs.

Policies must be coupled with standards for defining and determining what constitutes sustainable agricultural practices. Is it organic? Regenerative? Agroecological? All of the above?

The definitions of these terms as well as their real-world application are contested. During COP26, there was heated debate about the inclusion of agroecology in the Koronivia negotiations, a process which focuses on bringing technical discussions about agriculture into the UN convention on climate change. The decision on agroecology’s inclusion, however, was delayed until COP27.

You can have the most coherent and comprehensive policies in the world but without the money to implement, they are just words on paper. There were some new financial pledges at COP26 related to food and agriculture, such as £65 million pledged to support the Just Rural Transition and USD$4 billion from the US-led AIM initiative for agricultural innovation research.

The sustainable agriculture policy pathway announced at COP26, and signed by 32 countries, did call for this along with other pledges to reward farmers for sustainable agricultural practices, phasing out perverse policies, incorporating commitments into NDCs and investment in research and development. But for real action to happen, countries need to get this in their plans.

Targets, policies and finance all need to be underpinned by governance: Who makes decisions about the future of food and farming? How can we make sure that vested interests don’t have undue influence over agri-food policies within the UNFCCC? How can farmers, producers and food workers have an equal seat at the table? How does this relate to other UN fora, such as the Committee on Food Security? These are all questions that need to be answered to ensure that food is on the formal menu.

The four corners of the puzzle – targets, policies, money and governance – they are all huge issues, but if we can get them in place, the rest of the puzzle can hold together better. As the FRC’s Professor Tim Lang recently wrote, COP27 in Egypt in 2023 will be judged on whether the silence on food systems is broken. Food policy actors – governments, civil society, academia, business – have no time to lose.

Francesca Carnibella is an alumna of the MSc in Food Policy and is a campaigner on food and climate change. She currently works with a range of organisations on the climate impacts of industrial animal agriculture. She was previously the Food & Climate Campaign Manager at Oxfam GB and has experience of conducting grassroots research on food poverty with the Hackney Food Justice Alliance.